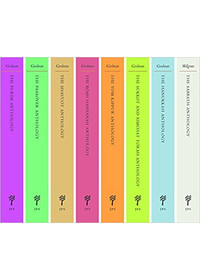 
Back in print by popular demand, the classic JPS holiday anthologies are unequaled compilations of Bible, Talmud, prayer, poetry, and folklore. Even in our digital age, they deserve a place on the bookshelf of rabbis, cantors, educators, and any reader seeking the meaning and origin of the Sabbath and Jewish festivals. The volumes mine Bible, Talmud, midrashim, and a rich variety of other sources, including works by prominent authors.

The Purim Anthology relates how the first Purim originated, explains the laws and rites, describes its colorful celebration in different eras in commemoration of local deliverances, and presents a reservoir of contemporary articles, stories, and poems- exploring the holiday’s multifaceted art, music, plays, and humor.

The Passover Anthology describes the Jewish experience of Passover throughout the lands and ages -the story, celebrations in the home and community, laws and prayers, seder plates and songs, art and dances, prayers and games; and showcases modern writings by Winston Churchill, Heinrich Heine, Hayim Nahman Bialik, and others.